Cookies help us deliver our services. By using our services, you agree to our use of cookies. Learn more

In 1946 a group of seven artists met at a local school wishing to share skills and enthusiasms and organise joint art exhibitions.  They went on to found Exmouth Art Group with the agreed aim “to encourage the appreciation and practice of the visual arts in this district”.  Seventy years later with more than 200 members the Group very much keeps to this ambition.

Since 1955, when several members knocked at their door asking for permission to sketch in the spectacular grounds of Lee Ford, we have been privileged to have the unfailing support of the Lindsay-Fynn family.  Today Nigel and Heleen Lindsay-Fynn are second generation Patrons and take a close interest in the Group’s well-being hosting a reception each year in the grounds of their beautiful home in Budleigh Salterton.

Through generous sponsorship we are able to offer several awards.

A substantial legacy left by Norah Pearse funds prizes at our annual  exhibition and Clifford & Sandy Lenn and Nick & Carol Williams donated the Channel View Cup to be presented to the artist whose exhibit is voted visitors’ favourite.

This year Gillie Newcombe, our current President, donated a trophy for a Members' Vote of their considered best in show.

In recent years, two trophies have been inaugurated by retiring Presidents May Neilson and Colin Marshall - the Neilson Trophy for the 3D Best in Show at our Autumn Exhibition and the Mayor’s Best in Show Trophy at the Exmouth Festival Exhibition.

In addition at competition evenings we have two awards - the Architecture and Landscape Salver donated by Paul Butler, a Group member, and the Neil Ashley Cup for Monochrome Drawing bequeathed by the family of the late artist and member.  The Roger Matthews Cup is presented to the competition winner at our Christmas party.

We celebrated our 70th Anniversary in 2016 and this year held our 73rd Annual Exhibition at Ocean on Exmouth seafront.  The enthusiasm and enjoyment of both members and visitors on each occasion reassures us that we are set to continue for at least another seventy years. 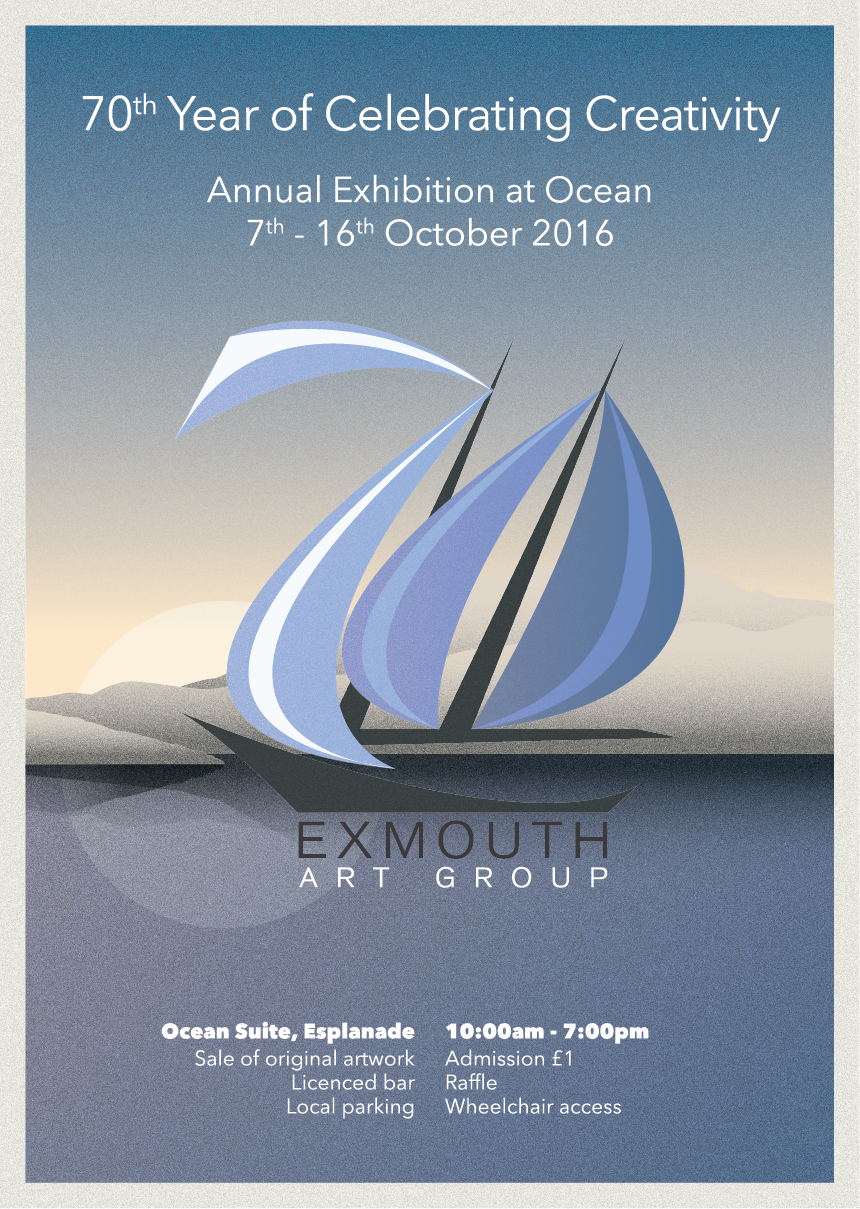 Indeed the Group has an unbroken record of holding a major exhibition annually and at our 70th event we were delighted by the presence of our Guest of Honour Mary King MBE.  For many years our regular venue for the autumn show was the Elizabeth Hall, formerly on the site of the Premier Inn, then relocated to Exmouth Community College, and for just one year in the Owen Building on the then Rolle College campus.  Our traditional location now, however, has become the second floor of Ocean on Exmouth seafront.

Our Exhibition during the Exmouth Festival held for several years in the Council Chambers of the Town Hall relocated to the Kennaway Centre on Victoria Road, then for one year to Ocean on Exmouth seafront  but for the first time last year we moved  back to the original Elizabeth Hall location but this time with the support of Whitbread PLC we were able to use the facilities of the Premier Inn.

Previously, we had a long association with the National Trust’s A la Ronde holding a  Group exhibition there in the summer and individual members still put on own solo events in the tearooms at different times of the year. 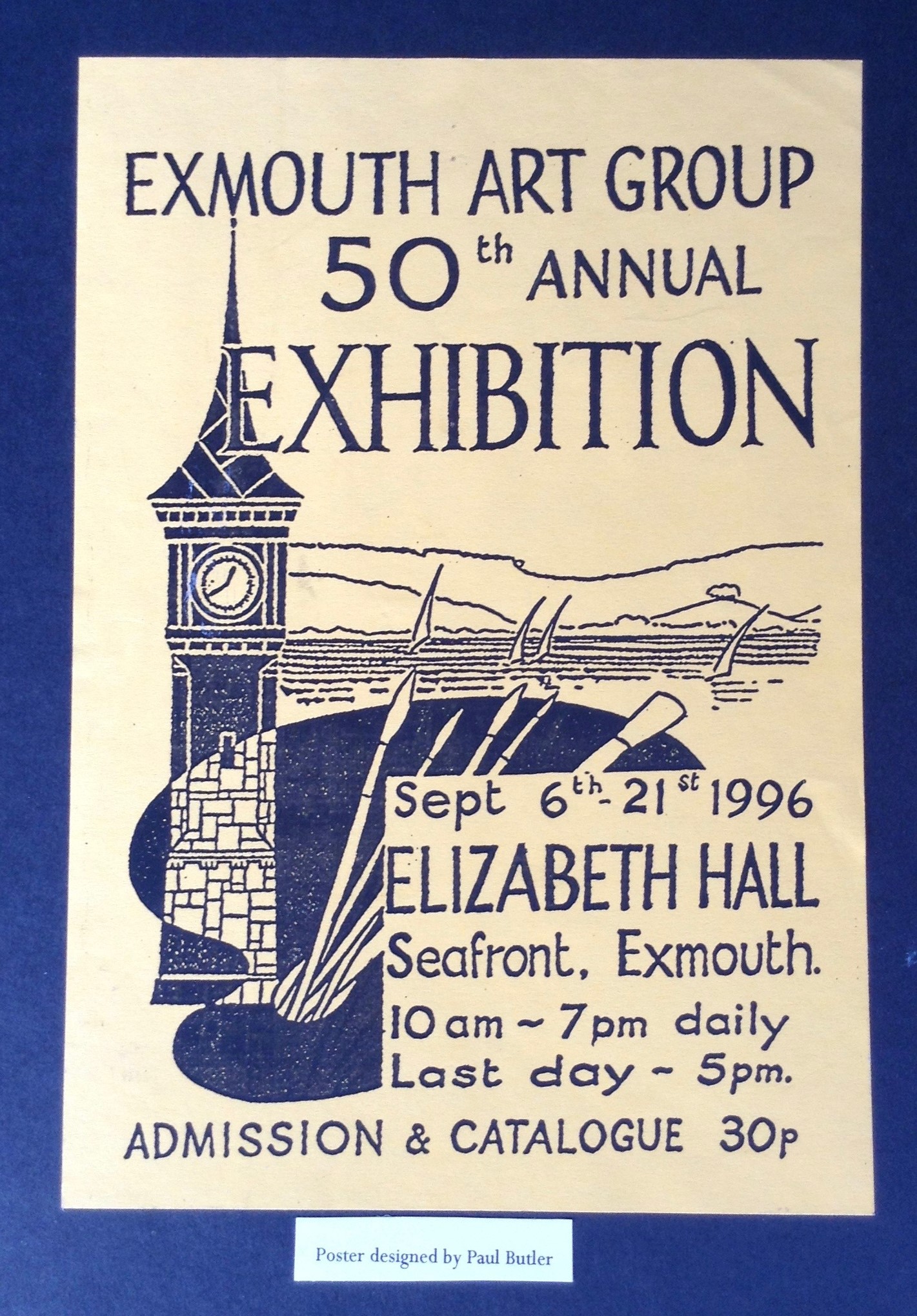 We hope you will enjoy looking back over the years.....

The collection of Archive images has been taken from an Album created by Muriel Johnson in 1996. She has been a long-standing member of the Group, joining in 1983 after being encouraged by the Annual Exhibition in 1982 at the old Church Institute Hall in Rolle Street. Muriel became the Group Secretary in 1985 and after five years as Secretary, three years as Vice President and then ultimately three years as President from 1994-97.

The Art Group is grateful to Muriel for having taken time to create these records and we hope you will enjoy looking through some of the old images. Her content was collated using pages from the annual Exhibition catalogues, the members’ little Golden Jubilee Brochure (1946-1966), press cuttings and photographs from The Artist and Leisure Painter, Exmouth Journal, Express & Echo, Exmouth Herald.

Photographs taken by David Binmore (Golden Jubilee Dinner), Muriel Johnson, Tom Reeves, Nigel Lyndsay-Fynn, Doreen Cutler and there are many members’ photos of their own paintings.

We hope you will enjoy these few pages as you ‘Peep into our Past’. Please click on the links below to view these images.